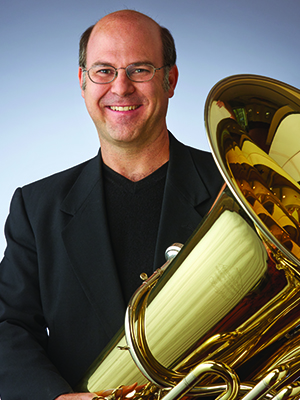 A year after switching to the tuba, Anthony Kniffen became only the fifth tuba player in sixty years to win the Interlochen National Music Camp concerto competition. His first professional orchestral experience a year later, at age 18, was playing Principal Tuba on a concert in the Chicago Symphony Orchestra under Sir Georg Solti as part of their tuba audition.  Another year later he joined the Honolulu Symphony Orchestra and was subsequently appointed Principal Tuba of the Indianapolis Symphony Orchestra in September 1997.  He later slowly finished his studies at Indiana University with a Bachelor's of Music Performance and was awarded a Performer's Certificate, having studied with Daniel Perantoni and Harvey Phillips. He also studied with Gene Pokorny and Arnold Jacobs of the Chicago Symphony, and Robert Tucci, of the Bavarian State Opera Orchestra and Floyd Cooley, of the San Francisco Symphony, and Bernard Schneider, St. Louis Symphony Orchestra.

Playing along with such diverse groups as folk artists the Makaha Sons of Ni’ihau in Hawaii to the Buselli-Wallarab Jazz Orchestra here in Indianapolis, Mr. Kniffen has also performed with the Saint Louis, Minnesota, Detroit and New Mexico symphony orchestras and recorded numerous discs with the Cincinnati Symphony Orchestra.  He has toured the United States extensively with Summit Brass and in Japan with Sierra Brass. He has won four concerto competitions and appeared as soloist with the Honolulu and Indianapolis Symphony Orchestras. Other solo appearances include regional and international tuba conferences and colleges, including his alma mater, Indiana University.  A highlight of Mr. Kniffen's career was performing the John Williams Tuba Concerto on an ISO Classical Series Concert under the baton of Mario Venzago in February of 2008.

Mr. Kniffen is the ‘play-along’ tuba player on a Hal Leonard educational project called, “Essential Elements 2000," and can also be heard on a tribute CD to jazz legend David Baker, "Basically Baker" (volume one), and on the popular 2010 recording, "CSO Resound:  The Chicago Symphony Orchestra Brass Section Live."

He is devoted to his lovely wife, ISO violist Amy Kniffen, their children, and their church, and is proud of having lived through completely remodeling their master bathroom mostly by himself learning from Youtube videos.