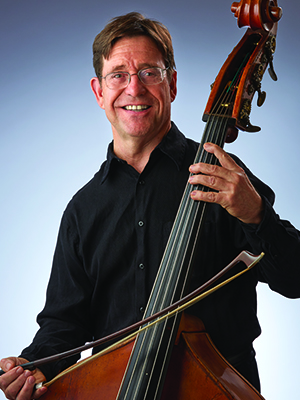 Robert Goodlett II is a native of Frankfort, Kentucky. He received his B. M. degree in organ and church music from the University of Louisville and his M.M. in contrabass performance from Indiana University. He has studied with Murray Grodner, Gary Karr, Larry Hurst, Warren Benfield and Julius Levine. Prior to joining the Indianapolis Symphony Orchestra in 1972, he played four seasons with the Louisville Orchestra.

In addition to his performing duties, he teaches many private students through the Quattro String Academy, which he and his wife, Chin Mi Kim (a violinist) formed in 2009. He also serves as a section coach in the ISO’s Side by Side concerts. He was the recipient of an Artist Renewal Grant from the Indianapolis Arts Council in 2003. The father of three sons, Goodlett has been a coach, official and administrator for several soccer programs around Indianapolis and is the former organist/choirmaster at All Saints Episcopal Church. Away from music he is an avid bicyclist.