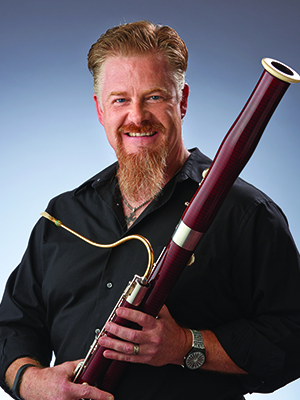 Joined ISO: 2002 Primary musical studies: Bassoon and Jazz Saxophone, Loyola University of New Orleans; Bachelor’s Degree in Bassoon Performance, Boston University; Master’s Degree in Bassoon Performance, Cincinnati Conservatory of Music Teachers included: William Winstead, Matthew Ruggiero, Crawford Best, Yoshi Ishikawa, Jon Beebe, Paul McGinley, Garvin Bushnell, John Reilly, Steve Tavaglione Mark grew up in Las Vegas where his parents and two brothers still live. He attended Loyola University in New Orleans for two years majoring in bassoon and jazz saxophone. After transferring to Boston University, Mark received a Bachelor of Music degree in Bassoon Performance, graduating Magna Cum Laude. While in Boston, he won the Alan Mark Roberts Performance Competition, and was the top woodwind finalist for the Boston Pops Concerto Competition on bassoon. Mark played for one season with the Las Vegas Symphony Orchestra then joined the United States Air Force Band at March Air Force Base in California as saxophone soloist (and woodwind doubler), and four years later moved to the Air Force Academy where he was the principal bassoonist with the United States Air Force Band of the Rockies for four years. He moved to Cincinnati to study bassoon at the Cincinnati Conservatory of Music and completed his Master's Degree.

Over the last 20 years, Mark has performed in many different musical projects including professional recordings, musical theater, chamber ensembles, jazz and R&B groups, as well as many orchestral performances, including being a member of the Saxophone section for the Cincinnati Pops under Erich Kunzel. He has performed all over the world in many different venues, ranging from Carnegie Hall to the Grand Ole Opry and MTV. A versatile performer, Mark plays all the saxophones, clarinets, flutes, and bassoons.

Mark has studied bassoon with William Winstead at CCM, Matt Ruggiero at Boston University, Crawford Best at Loyola University. Mark also studied saxophone with Paul McGinley, Garvin Bushell, Craig Yancey, Jeff Barash, and has studied woodwind doubling with John Reilly. In June 2003, Mark was the featured soloist with the Pittsburgh Symphony Orchestra under the baton of John Williams, playing the second live performance of Williams’ "Escapades for Alto Saxophone and Orchestra." Mark is an active studio musician and records regularly for the Hal Leonard Publishing Company as well as many other projects.  He teaches Bassoon at the University of Indianapolis and is a founding member of the Icarus Ensemble – a jazz quintet made up of ISO musicians Dean Franke on violin, Peter Hansen on bass, Jon Crabiel on percussion and Gary Walters on piano. They can be heard performing around town, at the Jazz Kitchen, and followed on their Facebook page.  Look for Icarus’ first CD coming out the end of 2014.

Mr. Ortwein has two children, Nicholas (Olas) and Catherine, and two step children, Myles and Channing. Olas went to Indiana University for Jazz Bass and is currently living in New Orleans playing bass on a cruise ship.  Catherine lives in Cincinnati doing photo shoots for Amazon.com.  Myles and Channing attend the International School of Indiana and are very active in sports and take private music lessons at Grove Haus.

Mark’s wife Carrie is a Nurse Practitioner with IU Health Physicians and they are the owners of “Grove Haus” - an old historic church in Fountain Square that they have turned it into their home and an event/ performance venue.  Grove Haus can be found on Facebook and at: grovehaus.com

Mark is a Yamaha Performing Artist on Saxophones and Bassoon.