Under the leadership of Music Director Krzysztof Urbański and Principal Pops Conductor Jack Everly, the Indianapolis Symphony Orchestra has become a leading orchestra in the nation with its commitment to artistic excellence, diverse and creative programming inside and outside its historic Hilbert Circle Theatre home, its engagement with communities throughout the state of Indiana and its ambitious approaches to music education, performance and collaboration.

The ISO continues to engage new audiences through innovative programming including the Fifth Third Bank Lunch Break Series of casual 45-minute performances each summer, the holiday traditions of the IPL Yuletide Celebration, the Stella Artois Happy Hour at the Symphony Series, and the popular Bank of America Film Series.

The Indianapolis Symphony Orchestra was founded in 1930 by German conductor and local violin teacher Ferdinand Schaefer. At first comprised of volunteer musicians who split the revenue from ticket sales, the ISO became a professional orchestra with salaried musicians in 1937. That same year, Fabien Sevitzky – a Russian-born conductor and nephew of famed conductor Serge Koussevitsky – became Music Director of the ISO. Sevitzky’s appointment was highlighted in an April 5, 1937 article in Time Magazine, which began, “Of Midwestern orchestras, none has risen so rapidly or so recently as the Indianapolis Symphony.”

Soon after, the ISO blossomed into one of the nation’s most renowned orchestras. Sevitzky worked to promote the ISO through a variety of national radio broadcasts, and his successor, Izler Solomon, ensured the creation of the Clowes Memorial Hall on the campus of Butler University as a venue meant specifically for the ISO (until then, the ISO had been performing at the Murat Theater). Throughout the 1950s and 60s, the ISO traveled around the world to perform “Salute” concerts in countries such as Finland, Korea, Japan, Formosa, Portugal, The Netherlands, Israel, Mexico, Austria, Venezuela, Thailand, Greece and Chile – earning the Orchestra a Citation from the Voice of America and the United States Information Agency as well as a letter of commendation from President John F. Kennedy – the first ever such commendation to a symphony orchestra.

Solomon’s successor, John Nelson (1976-1987), is associated with the Orchestra's appearances at Carnegie Hall and the Kennedy Center, plus a debut European tour in 1987. In the summer of 1982, a 14-year-old violinist named Joshua Bell was the first performer for the ISO's Symphony on the Prairie series, and in 1984, the ISO moved downtown to its new home at the restored movie palace -- the Circle Theatre.

In 1987, internationally renowned performer, conductor and composer, Raymond Leppard (1987-2001) was selected as the Orchestra's fifth Music Director. During his tenure, several key accomplishments took place: a return to regular recording with a series of CDs on the Koss Classics and Decca labels; performances on NPR's "Performance Today"; nationally-syndicated radio broadcasts of ISO concerts; acclaimed tours on the East Coast and two tours of Europe; and a performance at Carnegie Hall as part of the venue's centennial season.

In September 2011, Krzysztof Urbański began his tenure as the seventh Music Director of the ISO, and upon his appointment, was the youngest Music Director of any major American orchestra. Today, Maestro Urbański is one of the most acclaimed and respected young conductors in the world.

Learn more about the ISO: Purchase the 75th Anniversary book below! 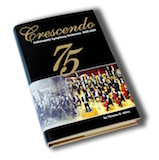 Thousands of talented and dedicated professionals and volunteers have contributed to the Orchestra's first 75 years. This is their story.