A ladybug's search for her own special song

Already purchased your copy of The Garden Symphony?

Visit this page to access the music that accompanies the story. You can also view a read-a-long video below!

Meet the Artists Behind Garden Symphony 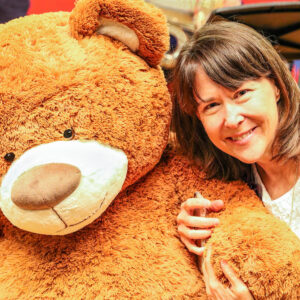 Violin (And Author of Garden Symphony)

Victoria is a violinist with the Indianapolis Symphony Orchestra and has written programs for the ISO Teddy Bear Series since its start in 2014. She has received the Alice D. Akins award for excellence in Music Education and is a 2017 Creative Renewal Arts Fellowship recipient. She lives in Indianapolis with her husband, her son, and one lazy orange cat.

Jennifer, a Buffalo, NY native is the Principal Oboist of the Indianapolis Symphony Orchestra. She has performed as Guest Principal Oboe with the Pittsburgh, Detroit, Baltimore and Milwaukee Symphony Orchestras and as Guest English Horn with the Atlanta Symphony. Ms. Christen studied at the Juilliard School with John Mack, Nathan Hughes and Elaine Douvas. Jennifer loves butterflies, ladybugs and fireflies!

Samuel Rothstein was appointed as the assistant principal and bass clarinetist of the Indianapolis Symphony Orchestra beginning at the start of the 2015-16 season.  He received his bachelor’s degree in music performance from Northwestern University where he studied with J. Lawrie Bloom and Steve Cohen. His favorite bug is the bumblebee!

Sarah grew up in Richmond, Virginia, where her mother was a violinist in the Richmond Symphony and Sinfonia. She started Sarah and her two sisters, Rebecca and Miriam, on violin when they were very young, but Sarah found the cello more interesting. Sarah’s favorite bugs are fireflies, of course! But I also love seeing a Walking Stick move, a Praying Mantis turn to look at me, a Bumblebee on a flower, a Cicadas red eyes, a Butterfly’s beautiful wings, a Spider spinning an amazing web……. I really love all bugs!

Born and raised near Cleveland, Ohio, Diane began her musical journey with the piano at the age of three. When Diane attended the National Music Camp at Interlochen, Michigan, to study piano and art, she also signed up for a beginning harp class, having been fascinated by a harpist she’d seen on television. She fell in love with the instrument and began working with the Cleveland Orchestra’s renowned harpist, Alice Chalifoux. Diane loves ladybugs and is so happy that she gets to be the ladybug in The Garden Symphony!