Hackman’s relationship with the ISO is nearly a decade in the making and he joins the ISO once again bringing his musical fusions to life through the new Uncharted Series.

Not only is Hackman an accomplished and decorated musician, fully capable of producing a compelling piece of music, but it's clear that he loves the classical and pop elements with equal force. 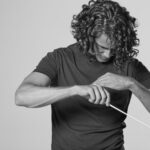 Hackman’s relationship with the ISO is nearly a decade in the making, as his first concert at the
Hilbert Circle Theatre took place in January 2010. Steve Hackman is a daring voice leading the charge among a new generation of classical musicians intent on redefining the genre. Equally adept in classical and popular forms, his breadth of musical fluency and technique is uncanny—he is at once a composer, conductor, producer, DJ, arranger, songwriter, singer, and pianist. He uses those wide-ranging abilities to create hybrid compositions that blur the lines between high and pop art.

The result is evocative works that are both derivative yet wholly original. He synthesizes Brahms and Radiohead, Bartók and Björk, and Beethoven and Coldplay into epic orchestral tone poems; re-imagines Stravinsky and Shostakovich into original orchestral-electronic concept albums; and samples Verdi and Debussy and interpolates them into hip-hop tracks. His performances of these pieces have surprised and thrilled diverse sellout audiences across the country, including with the orchestras of San Francisco, Seattle, Pittsburgh, Colorado, Nashville, Oregon, Indianapolis, Grand Rapids, Columbus, Charlotte, Southwest Florida, Alabama, Colorado Music Festival, and the Boston Pops.

Hackman has served as Creative Director of the Indianapolis Symphony’s Happy Hours Series, now known as the Uncharted Series, designed to redefine classical music and welcome the next generation of fans into concert halls around the world.

The two upcoming Uncharted Series performances will feature the musicians of the ISO on Hackman’s fusions: The Resurrection Mixtape (March 16, 2022) and Brahms V. Radiohead (June 1, 2022). The world premiere of The Resurrection Mixtape will be a musical fusion that blends composer Gustav Mahler’s Resurrection Symphony with the notable works of The Notorious B.I.G. and Tupac Shakur. Warning: explicit content is included in this performance. Parental discretion is advised. Brahms V. Radiohead will feature the works of composer Johannes Brahms fused with the well-known songs from the band Radiohead.