Celebrating the history of the ISO: the 1960s

Paramount among the dreams of those who loved the ISO was the idea that one day, the Indianapolis Symphony Orchestra would have its own... 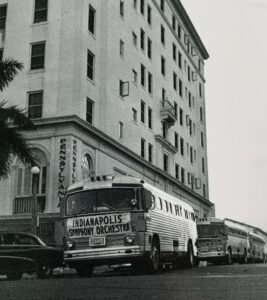 Paramount among the dreams of those who loved the ISO was the idea that one day, the Indianapolis Symphony Orchestra would have its own concert hall. Playing at the Murat Theatre was getting complicated because of scheduling conflicts. Enter Dr. and Mrs. George Henry Alexander Clowes. After much discussion, it was decided that Clowes Memorial Hall would be built on the campus of Butler University at a cost of $3.5 million. The ISO would become the primary tenant, and the building would also serve the needs of the university.
The night of October 18, 1963 was nothing short of a Hollywood premiere. The sky above Clowes Memorial Hall was bright with spotlights, the walkways were strewn with red carpets, diamond roses were abundant, and the attendees were adorned with the finest in furs and formal outfits. Actor Maurice Evans served as Master of Ceremonies and Maestro Solomon and the Orchestra began the program with a specially commissioned work by IU Professor Bernhard Heiden titled Envoy for Orchestra. The initial concert began a 10-day festival that included a Gala Young People’s Opening featuring the Orchestra and Bob Keeshan (Captain Kangaroo), a Gala Popular Opening with Bob Hope and The Four Step Brothers, and a Gala Choral Opening featuring the Orchestra and the Indianapolis Symphonic Choir performing Verdi’s Requiem with guest conductor Silvio Varviso. Musicians hoped that the new concert home would become the launch pad toward realization of their other dream: a year-round season.

Domestic touring became an important part of the annual performance schedule of the ISO. They regularly spent three week in the fall and three weeks in the spring on tour. In 1968–69, the ISO performed a 31-day trip out west and then headed out on a 21-day visit to states in the Midwest and on the East coast, including a visit to Carnegie Hall. Only two of the continental 48 states failed to receive a live performance of the ISO under Solomon: New Mexico and Idaho. The ISO traveled on three buses, dubbed the “all-male,” the “gourmet,” and the “hospital.” Smoking was permitted on the all-male bus, and each bus contained two card tables with bridge, hearts, poker, and pinochle as the games of choice. Musicians were paid a weekly per diem and provided double room lodging. 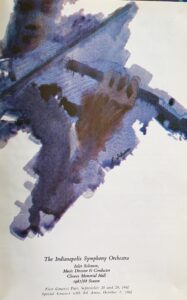 In the summer of 1966, the Ford Foundation announced the most stunning support ever made to date toward symphony orchestras in the U.S. The ISO received notification of a $2.5-million grant, which would help the ISO to establish a meaningful level of endowment funding. The stipulation was that the $2 million in funds had to be matched dollar for dollar by the Society. In 1967, almost a year later, John S. Lynn, General Manager of Lilly Endowment, Inc., proclaimed a grant of $2 million to assure the needed matching funds.
The musicians also dreamed of a 52-week season instead of the current 28, which would require a greater support of patrons and financial contributions. The musicians went on strike in April 1966 when their contract expired and fought for higher salaries and more weeks in their season. In October, they reached a settlement for a five-year contract for a 36-week season.

In the summer of 1968, prominent Hoosier fashion designer Norman Norell was hired to create a dress that would be uniformly attractive and functional for the women of the orchestra. For nearly 10 years from 1969 to 1979, Norell’s dress design graced the female musicians on stage.

When the orchestra was not performing year-round, the ISO musicians often found employment elsewhere during the summer. Some of the jobs musicians found in the summer of 1964 included working at Sears, traveling as a tour guide with Miller Tours, selling cameras at Hoosier Photo, bricklaying, selling insurance, tuning pianos, working in warehouses, subbing as teachers, and working with the Indianapolis Parks Department. Many found musical jobs for the summer and worked at Starlight Musicals in Indianapolis or across the country at summer festivals. 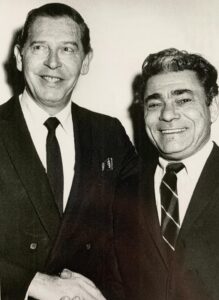 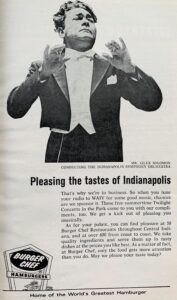 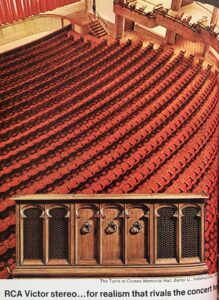 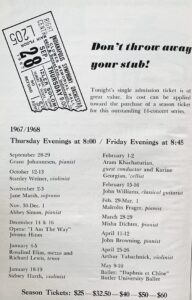 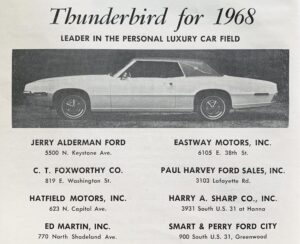 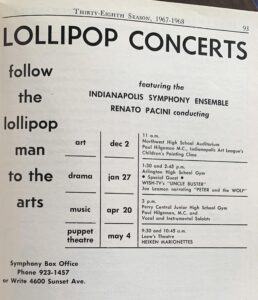 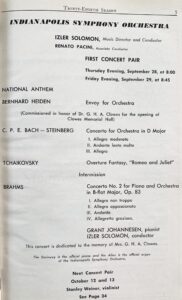 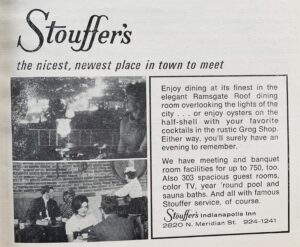 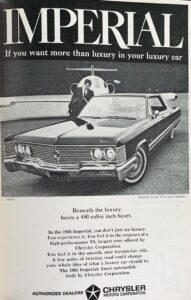 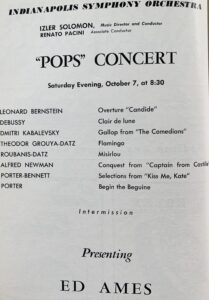 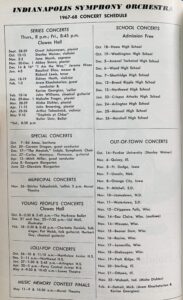 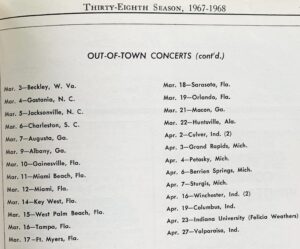