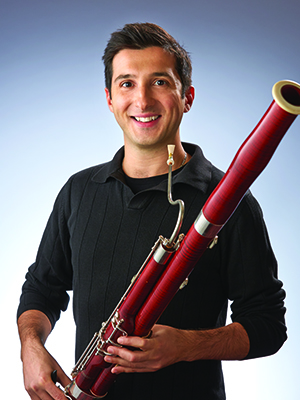 As a native of Ukraine, bassoonist Oleksiy Zakharov is currently a member of the Indianapolis Symphony Orchestra. In September 2013, Mr. Zakharov joined Chicago's International Beethoven Project as the Principal Bassoon of the Beethoven Festival Orchestra, a chamber orchestra of musicians from prominent American orchestras including Chicago Symphony, New York Philharmonic and Saint Louis Symphony.

Before moving to Indianapolis, Mr. Zakharov was a core bassoonist with the Philharmonic Orchestra of the Americas, as well as an active freelance musician in New York City. In the fall of 2008, he served as Acting Associate Principal Bassoon of Los Angeles Philharmonic Orchestra. He has also performed extensively with the Schleswig-Holstein and Verbier Festival orchestras, as well as participated in such festivals as Music Academy of the West, Colorado College Music Festival and National Orchestral Institute.

Mr. Zakharov has taught as a guest bassoon instructor at the Oberlin Conservatory, the Advanced Bassoon Institute at Interlochen Center for the Arts, and has served as a Guest Judge for the concerto competition at Indiana University, Jacobs School of Music. Mr. Zakharov is one of the woodwind coaches for the ISO's Side-By-Side program.

Mr. Zakharov received a Master of Music degree from the Juilliard School and a Bachelor of Music from Oberlin Conservatory. He also holds a post-graduate diploma in Orchestral Performance studies from Manhattan School of Music. His primary teachers include Patricia Rogers, Whitney Crockett, George Sakakeeny and Barrick Stees.