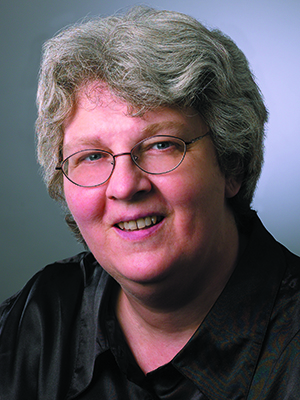 Jill was born in Herrin, Illinois, and grew up on the North Shore of Chicago. Prior to joining the ISO, she played with Orchestra della RAI in Torino, Italy, and the National Arts Center Orchestra in Ottawa, and freelanced in Ann Arbor, Michigan, Owensboro, Kentucky, and Evansville, Indiana. She “subbed” as the ISO’s fourth horn for two years following the retirement of John Miller from that position, before permanently winning the chair. Jill’s instrument was made in the 1950s by Carl Geyer. She is one of the five ISO horn players who premiered principal trombonist Jim Beckel’s In the Mind’s Eye in the spring of 2010, and she has three Christmas Horn Sextets published by the International Horn Society.

Jill has her share of interesting stories, but her funniest moment came when she was meeting someone for lunch in Bloomington and wanted to park near the music building. “I saw a sign that said ‘road closed,’ but I went down it anyway because I just wanted to park over to the side,” Jill says. “The car suddenly dropped with a ‘kerplunk.’ I opened the door and got out, walking through wet concrete, which my car was now up to the bumpers in. I tried pushing it out. Then I tried calling a tow truck, emphasizing that they needed to hurry in case this concrete was quick-dry. When I got back out, there was a policeman there who asked me if that was my car. I said “Yes” and he said “Well, you locked your keys in it!” I got towed out and then I had to hurry to the carwash to clean out the undercarriage. Luckily it was a rental car.”

Also a talented artist, Jill’s work can be seen online on her blog at www.dogparkcomix.com. She owns two Yorkshire Terriers, Percy and Izzy Girl.