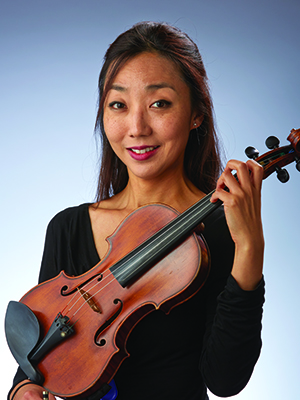 Violinist Jayna Park joined the Indianapolis Symphony Orchestra in 2001. In 2013, she was acting Assistant Concertmaster for the ISO and joined the Grant Park Music Festival Orchestra in 2015. Born in South Korea, she began her violin studies at the age of 6 and by age 7, Jayna won a concerto competition in Daegu, Korea which led to her orchestra solo debut with Daegu Philharmonic that same year. Since then she has won numerous competitions both in Korea and in the USA where she came to study violin at age 11 with the renowned violinist Berl Senofsky at the Peabody Conservatory.

An active soloist and chamber musician, Jayna has performed as soloist with the Korean Broadcasting Symphony Orchestra, the Suwon Symphony, the Netherlands National Radio Orchestra, and the Philadelphia Chamber Orchestra. She has also appeared in recital and chamber music concerts around the world with performances in France, South Korea,Canada, and the US - including a concert in New York’s Carnegie Hall. Jayna received a Bachelor of Music and an Artist Diploma at the Peabody Conservatory and the Manhattan School of Music where her teachers included Sylvia Rosenberg, Victor Danchenko, and Ik-Hwan Bae