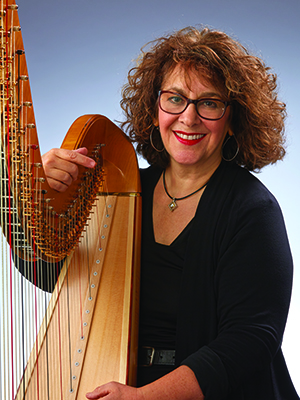 Born and raised near Cleveland, Ohio, Diane began her musical journey with the piano at the age of three.  When Diane attended the National Music Camp at Interlochen, Michigan, to study piano and art, she also signed up for a beginning harp class, having been fascinated by a harpist she’d seen on television.  She fell in love with the instrument and began working with the Cleveland Orchestra's renowned harpist, Alice Chalifoux. Participation in various summer music festivals, including Tanglewood, supplemented her studies at Oberlin Conservatory of Music, where she earned her degree in Harp Performance.

Before joining the ISO, Diane was a member of the Toledo (OH) and Omaha (NE) Symphonies.  Beyond her role as Principal Harp, she has appeared many times as concerto soloist, chamber musician and recitalist. "The largest live audience I have ever encountered was when I created a harp solo arrangement of the National Anthem which I played at the Hoosier Dome before an Indianapolis Colts game," she says. Diane also has a special love for teaching: “I feel privileged to have inspired and been inspired by many students of all ages and levels over the years.”

Outside of music, Diane is enjoying the empty nest, as her twins are now grown.  She participates in two book groups and a movie group.  Art, cooking, gardening and travel are ongoing hobbies.