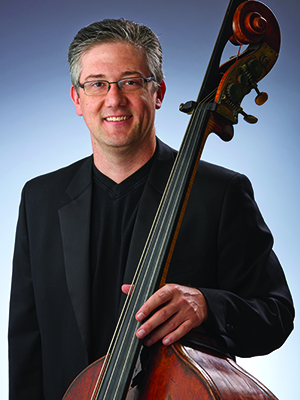 Brian Smith was born in Hampton, Va., and grew up in Georgetown, Ind. He received his Bachelor of Music degree in 1997 at the Peabody Conservatory in Baltimore. Prior to the ISO, Smith was a member of the Virginia Symphony (1997-2000), the Columbus (Ohio) Symphony (2002-2008) and also performed with the National Symphony, the Philadelphia Orchestra, the Northeastern Pennsylvania Philharmonic, the Concerto Soloists of Philadelphia, the Haddonfield (NJ) Symphony, the Reading (PA) Symphony and the National Repertory Orchestra.

When not on stage performing with the ISO, Brian is a passionate music educator and clinician in the area, maintaining teaching positions at the University of Indianapolis and a private studio in Carmel, IN.  Brian performs on a double bass attributed to the famed English instrument maker, B.S. Fendt, circa 1830.  Acquired from a 71 year veteran of the Atlanta Symphony in 2006, Brian enjoys continuing the tradition of his instrument’s decades long history of continuous performance in professional American orchestras.